It started out as the perfect Sunday....

I had a generous sleep in, followed by a slow stretch and relaxing shower to re-energize my tired muscles. It was late enough to have lunch, though it was breakfast I was craving so I dragged my friend Byron along to this petite looking cafe, filled with all the charms of a small french cake shop. The decor was frilly and feminine and the staff appeared to be selected from one of the glossy magazines on offer for the chic diners of Crown Street to read. 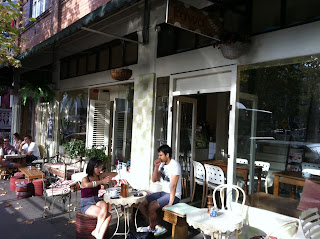 I'd read positive reviews about Kawa online and had walked past it to and from my way to work on numerous occasions. I'd taken a picture of it because the street view is warm and inviting and had even spotted a celebrity or two dining there.
In short, everything about this cafe, even their own chalk board beside the front door promised, 'Best cafe in the best part of Sydney'.
Needless to say I was looking forward to breakfast with my friend without so much as a second thought as to the old saying, 'When something seems too good to be true, it probably is'.

The first waitress was impatient with our order and returned three times to take it. When our drinks arrived Byron's mango smoothie was so thick he had to eat it with a spoon (which wasn't supplied). The flavour was nice, though it tasted like mango mousse. When my chai latte arrived it was cold. Not very warm or hot, it was luke warm and watery. Disgusting.
I returned it politely and requested a mango smoothie in it's place, not wishing to make a fuss or disturb the other customers.

I ordered the vegan breakfast as I'm meant to be on a strict no dairy/ no meat diet but I simply could not resist two soft poached eggs. I have been dying for the creamy, warm liquid gold of an egg to slowly flow onto a piece of toast and into my mouth. What I received were two hard eggy lumps that had been overcooked. This started to irritate me but surely the rest of my breakfast would be delightful, right?? Wrong! 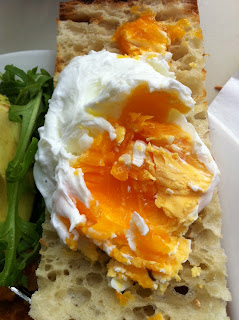 The homemade baked beans in tomato sauce were a gluggy mess that had been overcooked and resembled that chunky cat biscuit froth my cat spews up. The hummus was light and frothy but had enough garlic to extinguish any conversations you planned to have later in the week. I'd say it was aioli, and I'm being kind with that comment. The grilled tomato and two tiny pieces of pumpkin (that I needed a microscope to find) weren't bad but only because they were forced to share the plate with the remaining slops. 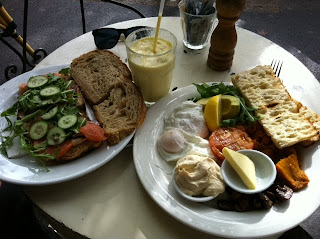 The avocado had brown spots but the mushrooms were tasty, though i hadn't realized there was a mushroom shortage in Australia, is there??
Byron's salmon sandwich wasn't much better so he combined ingredients from my plate to make something half decent.
When my smoothie arrived it was even thicker than Byron's. I could literally scoop a blob up with my spoon, invert the spoon and nothing would drip off. Thankfully it tasted ok and we were in a prime position to people watch the quirky, beautiful and interesting people who were busy walking about on a lazy, overcast Sunday afternoon.
Sadly, I haven't gotten to the worst part yet.. When the impatient waitress returned I assumed she was going to ask us how our meals were but instead she asked Byron if he was finished as he had pushed his plate away. When he politely replied, 'Yes, thank you' she then took his plate... And mine! I still had food on my plate, cutlery in my hands and was mid-chew but APPARENTLY I looked like I didn't need to eat any more.

Thanks to the sweet girl inside who only charged me the chai latte price for the smoothie (smoothies were $6 PLUS an additional $1 for ice cream... That's $7 for one smoothie!!) and 'fuck you' to Byron and I from Kawa in the form of an invoice just shy of $50 for the worst breakfast I've ever had, including that one in Thailand that gave me food poisoning.

We didn't tip but here's one now: don't eat at Kawa. Save your money. I was embarrassed for suggesting the place.

Now I hate to end on a sour note and I did promise you a tantalising blog about the sexy Mexican Agave and here's another thing to look forward to... I will divulge the most impressive little gem on Cleveland Street, 'The Nourishing Quarter'
Bnourished.

Meet you back here in a bit so we can lose ourselves in some talk of food so tasty, it's as if your taste buds have taken an exotic holiday.