A Greek Gem in Chilly Melbourne

The initial hype the morning we landed lasted for less than an hour. In that time we caught a shuttle bus to our hotel, checked in, gawked at the massive bed for no less than twenty seconds before jumping up and down on it and then collapsing with exhaustion and easily falling into a restful slumber.

We awoke maybe an hour or two later, stretched and yawned for a bit, then the inevitable started... The dreaded stomach grumbles, we were famished!
After freshening up at Superman speed we walked into the city, surprised at how cold it was during the day. Had we flown into Winter? In Alaska? Brrrr... Maybe! Perhaps that is a bit extreme, nonetheless it was teeth-chatteringly cool enough to warrant ordering a hot Greek coffee.

It was just as well we stumbled into the delightful Aspro Ble.

Greek coffee is something most people either like or dislike. It receives a golden coffee bean in my eyes if served piping hot, with a thick, smooth texture, strong coffee flavour and ever so delicately sweetened but still retaining that bitter quality of a strong espresso. When sipped on a rainy cold afternoon in Melbourne, it's pure bliss and can liven even the slowest of tired minds into animated conversation. Four dollars well spent. 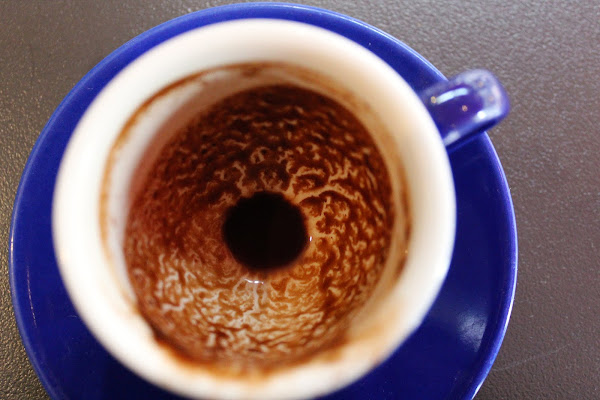 We slowly drained our mildly bitter coffees as the first of our courses arrived, saganaki cheese. This generously portioned haloumi-like cheese wedge was served hot with a dark cherry and fig conserve. 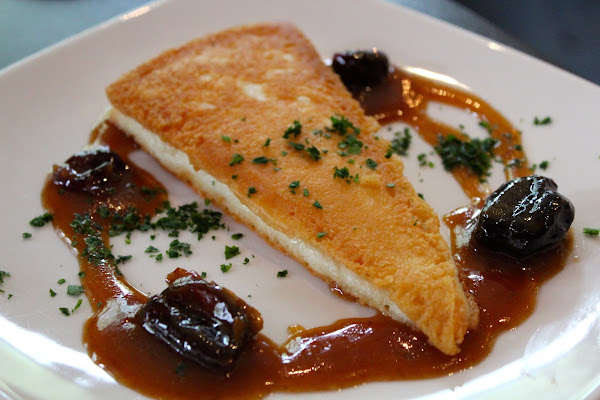 The dense, salty cheese was balanced perfectly with the sweet conserve and at $13, it was a perfect portion to share as our entrée before the next incredible course arrived. 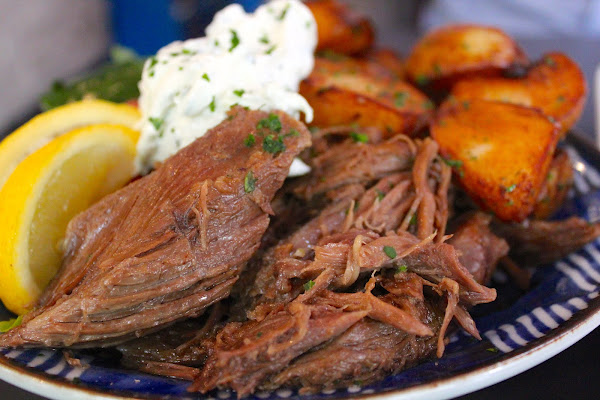 For our mains we shared two meals (Read: Score! Yet another bonus of sharing a meal with your best friend means you can try more items from a tantalising menu than what you might be able to sample when dining alone). The first main to arrive was slow roasted lamb that was so tender and moist it fell into juicy fleshy pieces as I carefully pulled it apart with my fork. At $18 we found it to be quite reasonably priced for the quality of the meat and how expertly it was partnered with chat potatoes, tangy tzatziki, Greek salad and zesty fresh lemon wedges. 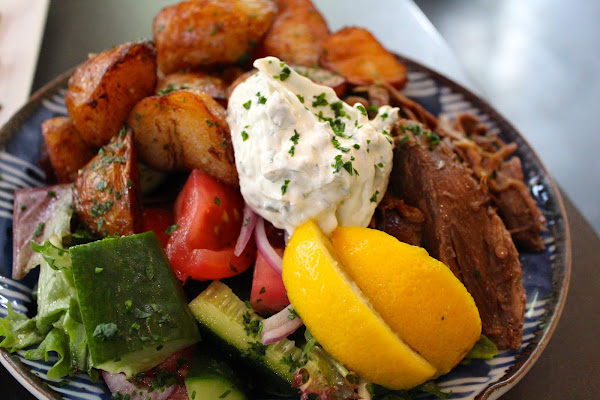 Our second main consisted of plump pork and goat sausages served with root vegetable ragout and chargrilled peppers for $14. 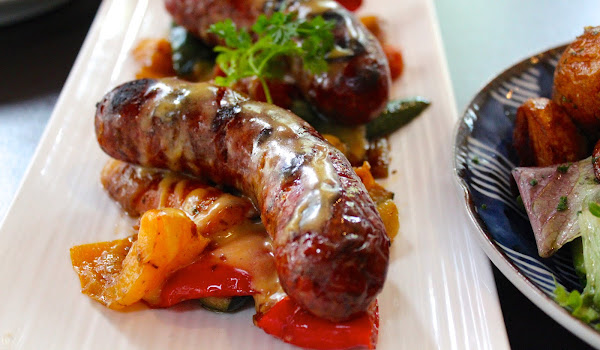 Each generous slice of sausage exploded with complex flavours, the ultimate comfort food. We sat in silence, slowly devouring the salty meat for a few minutes before the conversation started up again. Eating meals in this fashion, that is, meals that consist predominantly of meat is something I always imagined strong, hairy, sweaty men with long beards and bulging chests would do around an old table after working all day in the fields some one hundred or so years ago.

Cut to the present day during a late lunch service in a small, albeit welcoming and homey restaurant in the very heart of an arty metropolis and what I imagined about the giant sweaty muscle men made me laugh. There I found myself freshly showered sitting demurely in skinny jeans, biker boots and a sequined top (I never claimed I was a fashionista...) opposite my Malaysian husband, who was dressed very respectably in a pressed long sleeved blue cotton shirt and dark denim jeans with black leather boots. We were as far from giant sweaty muscle men as you could imagine. 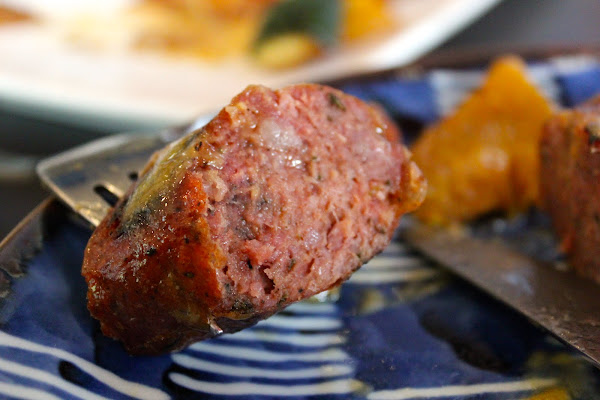 If you haven't tried Greek cuisine like this or haven't had the good fortune of dining at Aspro Ble, then I would highly recommend this little Greek gem in Melbourne.

You must take with you Mr. Large Appetite and leave any notion of inviting Ms. Diet or Miss Calorie Counting at the door because they are not welcome and quite frankly, they would be utterly embarrassed for coming inside and may make you feel guilty. Who wants friends like that, seriously?

If you want to eat 'a man's meal' or a thoroughly satisfying Greek meal, then add this little restaurant to your travel plans when you visit.

We washed our delicious meals down with refreshing $7 Monkey Cider, which is brewed in Victoria. The chilled, sweet apple cider was my elixir of choice in this scenario. It suited my skinny jeans. 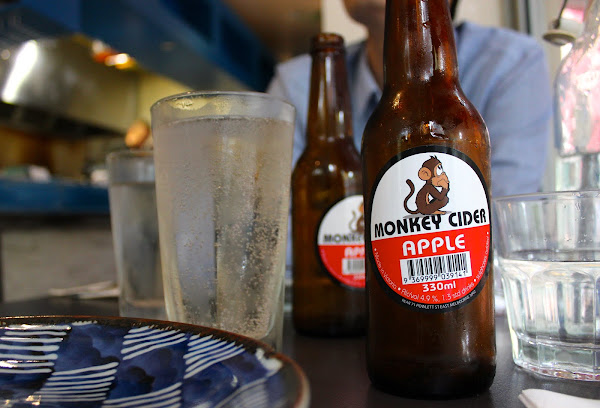 We tried to finish and nearly made it, however Mr. Large Appetite must have had a prior engagement and left us with one sausage to go. Typical sketchy fellow, he always ducks out during dinner.

We finished our drinks, paid our very reasonably priced bill and walked outside to be be greeted with patches of blue sky that had broken through the rain clouds. 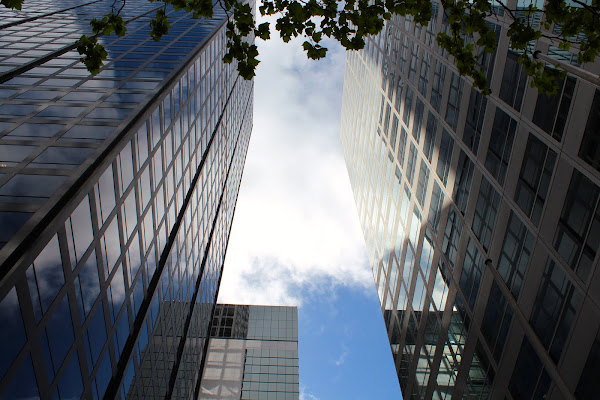 I think I saw Ms. Diet's forlorn face on the corner, so we made an abrupt about-face and marched off toward the magical stall that sells cinnamon sugar dusted hot churros and melted chocolate dipping sauce. I could always catch up with Ms. Diet when we flew home after our holiday.