How Are You Getting into the Festive Cheer?

Do you ever wonder how other people prepare as Christmas nears?

Growing up we used to watch American movies where a large family would all travel home to their childhood house. Usually Mom and Dad were still at home and the houses were no less than huge. Always covered in glistening white snow. Always a large green pine tree that was decorated to designer perfection, like in the fancy toy stores in New York. Always a larger family than my modest three or four person affair (with the exception of Christmas Day because my grand parents would join us). The children, teenagers and young adults were always model-like and beautiful, as if the entire family had been expertly cast specifically to appear together, which as we know is what happens in the movies.

There may be some family member who has a late work commitment, a pregnant lady, sometimes a dog, and always, always there is an element of comedy and an equally important element of family drama.

Whether it was National Lampoon's Christmas Vacation, The Santa Clause, Miracle on 34th Street, Love Actually or my favourite Christmas film in recent years, The Family Stone; there was always a reason to sit down with the family in our lounge room after dinner to watch a Christmas movie together. The only notable difference between those perfect families and us would be the climate.

I grew up on the coast in the Southern Hemisphere. Our Christmases always, without fail consisted of the beach, swimmers, a shady tent, Christmas pillow cases instead of stockings, a trampoline and a garden hose in our backyard, occasionally a sunburnt nose and Mum's incredible Christmas dinner. We would eat lollies and Christmas-themed baked treats, gulp down non-alcoholic egg nog and Mum would bring out her gold-plated cutlery and Royal Albert crockery, which we only ever glimpsed on December 25th. 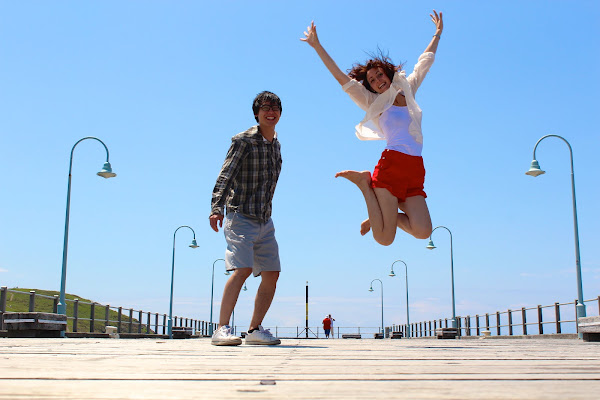 Now that i'm in my twenties and this will be my first Christmas as a wife in a beautiful beach house, we're doing things a little differently.

During one of our first walks on the beach we brought home a large piece of driftwood and a bucket of mostly broken seashells in various shapes and sizes, then dusted the sand off and glued white glitter all over the wood. It's our driftwood Christmas tree and it looks nothing like a real pine tree but we don't care because we didn't cut down a living tree, but rather breathed new life into something that otherwise would have floated back out to sea with the ever-changing tides.

Instead of egg nog, we've been drinking glasses of homemade citrus iced tea and instead of ice-skating or gathering around a crackling fire in ugly christmas sweaters, we've been walking along the beach barefoot. The sea is so warm here.

We threaded seashells and colourful beads onto fishing line and hung strings of the seaside themed decorations onto the driftwood. I wound some battery operated LED lights that I found lying around in a box of my old university belongings around the wood and before too long we'd finished decorating our first Christmas tree. It's very simple, very beachy, did not cost a cent and saved a little pine tree somewhere.