We were warned of coastal flooding and unusually high tides but I did not expect the beach to disappear completely. The tidal surge was frightening, one moment the waves had receded out past the lowest low tide mark and within mere seconds the white, foamy water came noisily crashing back towards the beach, engulfing the sand and obliterating anything in it's path. 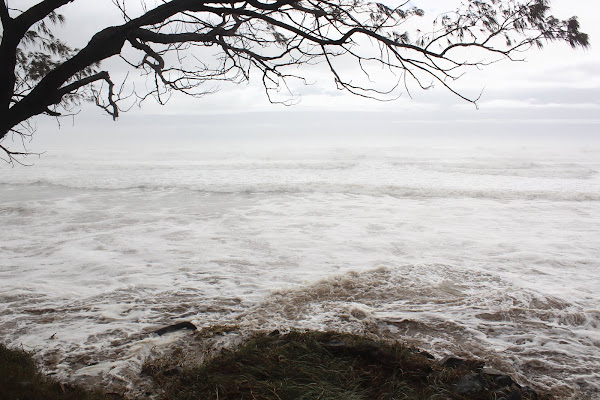 The waves themselves were white wash, giant messy waves covered in foam as far as the eye could see, and then some. The horizon faded from the churning white sea into a thick white sea mist, so bright that the glare stung my eyes worse than the strong wind.

Entire trees were uprooted and sloshed about in the water. The wild sea eroded the base of the boat ramp to the beach and deposited large rocks in it's place as the heavy rain continued to fall, over 300 millilitres in less than one twenty-four hour period.

Little old 'Lorna on the corner' experienced minor flooding inside her home and was very fortunate when this giant branch was ripped from the large pine tree in her front yard. Lucky because the branch missed the house, it could have inflicted substantial damage, possibly hurt poor Lorna as she lay sleeping. It fell without warning in the darkest hour of the night from a healthy tree, the bough itself the girth of a small tree, ripped from the trunk in the violent wind. 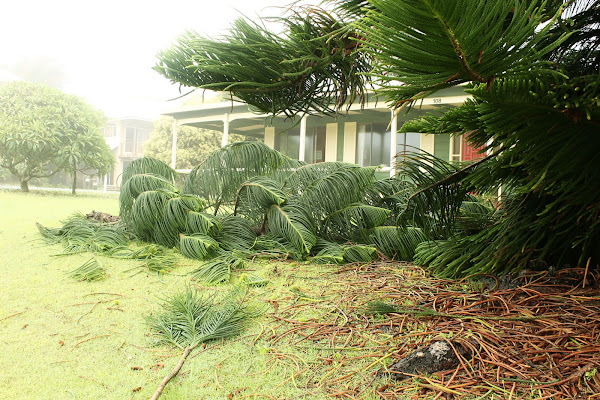 By 10:30 PM we were without power. A massive surge caused twenty thousand residences to lose electricity.

Byron had to work the morning shift at work. A 5:00 AM start, which meant 4:00 AM to rise. Pitch black. Rain lashing at our windows. No electricity. Two tired bodies scurrying clumsily in the darkness over cool, damp floors to find the matches to light the candles. Everything was damp and sticky with the humidity, including our linen and the clothes on our backs.

4:30 AM arrived and Byron raced to his car. He was drenched by the time he reached it, his umbrella inverted like a flimsy toy.

I locked the doors and returned to bed but I could not sleep for the incredible howling wind and regular crashing sounds of things blowing about outside. Bins blew over with noisy thuds, our metal outdoor furniture setting blew across our verandah and crashed onto the Tuscan pavers.

I ended up watching Nights in Rodanthe on the laptop as the battery icon slowly decreased without a constant power supply to charge it.

Nights in Rodanthe, ha! As I watched Diane Lane and Richard Gere huddle in a darkened room, fearful of the hurricane pounding immediately outside their shutters, bright flashes of lightning and powerful thunder boomed outside my windows. Coco jumped up onto the bed and I cuddled her protectively, Richard Gere style.

Had the northern tropical cyclone actually dissipated as reported or had it carved a path of destruction south, in a beeline direct to the front doorstep of our small beach house? With all the fury outside, I was inclined to believe the latter.

As the sky lightened slightly with the morning and my candles continued to flicker, their wicks glowing lower and lower with each passing hour, I slipped out of bed and into my slippers and floated downstairs to make something for breakfast. I usually cook when the weather is this bad. It's my favourite pastime on rainy days (on most days to be honest). The power was still out. No oven, no stove, no microwave (getting desperate). Breakfast was gluten free cereal, sliced banana and milk. I felt like steaming hot buckwheat pancakes, sizzling from the frypan served with maple syrup and fresh blueberries. This bowl of milk and soggy cereal was inconvenient and an unglamorous consolation prize to say the least. Deflated, I resigned myself to bed. When one laptop battery blinked to indicate it was running on reserve power, I switched laptops and watched another movie, eventually falling asleep around 10:00 AM.

The weather continued like this for three days and nights. On the fourth day, the rain eased and by some miracle, a crack of heavenly blue appeared in the darkened sky. A passing glimpse, but a good sign nonetheless. The clean-up began immediately and if I'm being truthful, I've only just gotten back on top of the general order of things almost an entire week after the storm arrived on our shores. The storms beauty and power mesmerised and frightened me at the same time. How could something so destructive be so compelling, so strangely seductive? I don't think I'll ever understand why. There is something to be feared and revered in a storm system of that magnitude.

We were lucky where others were not. We are grateful our home was spared when many families lost their homes to the cyclone and flooding that continues across a large portion of the state. When it comes to Mother Nature, there is nothing else as equally impressive as the human spirit.