Hiking in Borneo Part I

One of my favourite highlights from travelling our beautiful planet has been hiking through the tropical green jungles of Mulu National Park in Borneo. Here, clear flowing rivers wind through the dense forests like dancing snakes. Travel throughout the river systems is usually by longboats that seem to fly noisily through the water, past makeshift houses in scattered villages inhabited by the nomadic Sarawakian tribes of the Penan people. 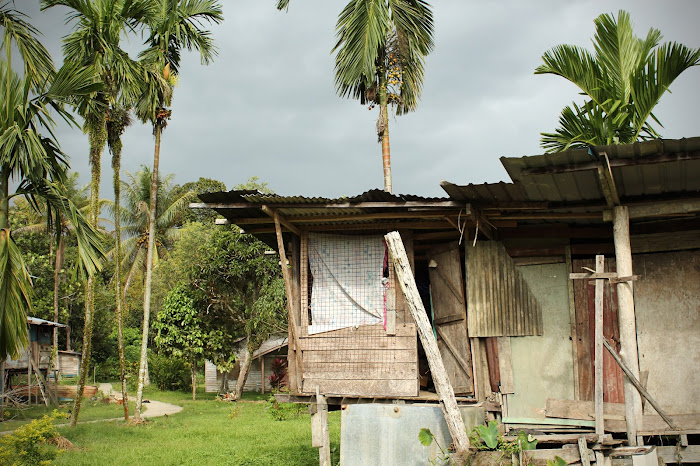 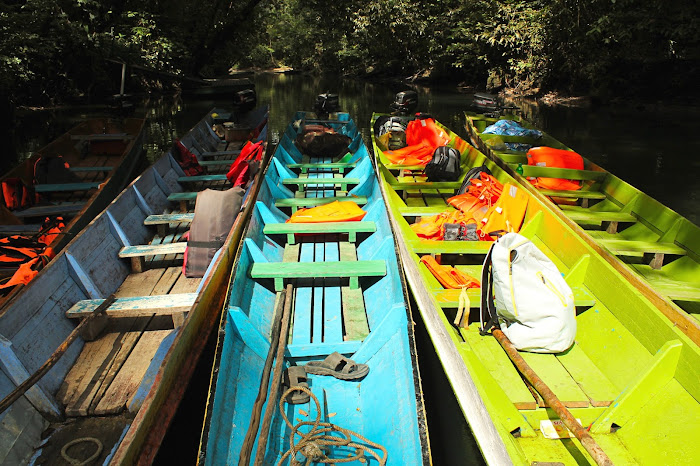 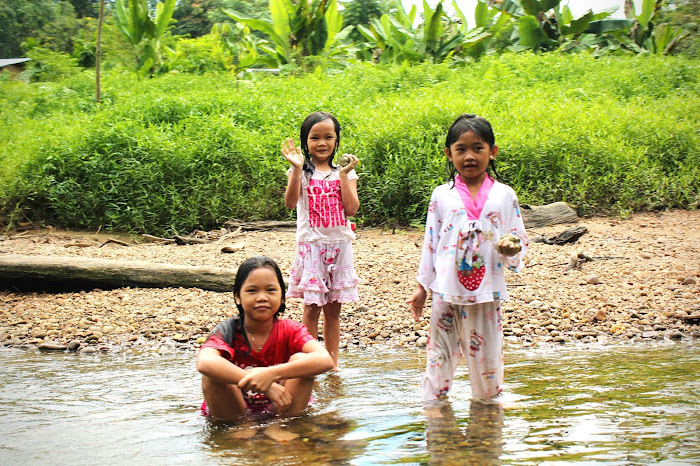 Penan houses // colourful longboats // Nomadic Penan children
The Penan children are beautiful, with sweet smiles, ebony hair and olive skin. Passing by I smiled and was greeted with the occasional wave as young girls splashed about in the water, seemingly oblivious to the hot, thick jungle air. 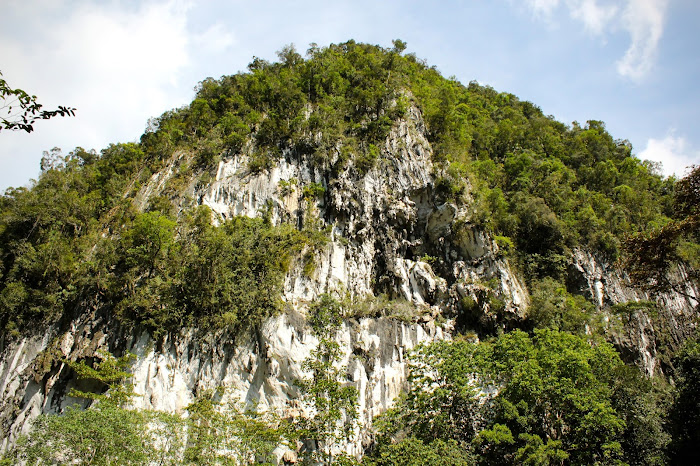 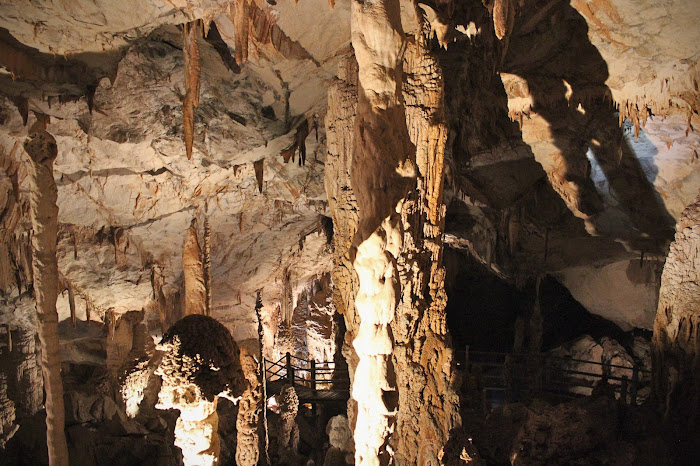 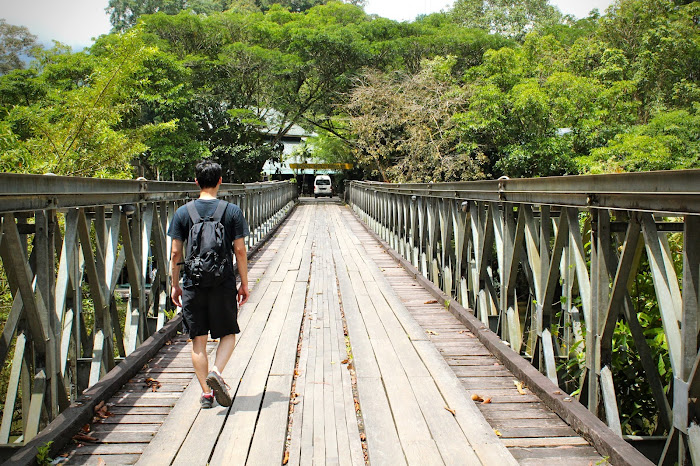 Limestone mountains // The Kings Chamber // dual vehicle and pedestrian bridge
Huge white limestone mountains emerge from the forest canopy with impressive jagged cliff faces. The Clearwater Cave and Cave of the Winds may be explored in the Gunung Api section of the Melinau limestone. During our hike we walked through the impressive Kings Chamber, identified by giant honeycomb columns and stalagmites. Whilst inside the Cave of the Winds, we noticed the temperature of the humid jungle air plummet as cool wind flowed through the cave along the same route of an ancient river that formed the cave many thousands of years earlier. 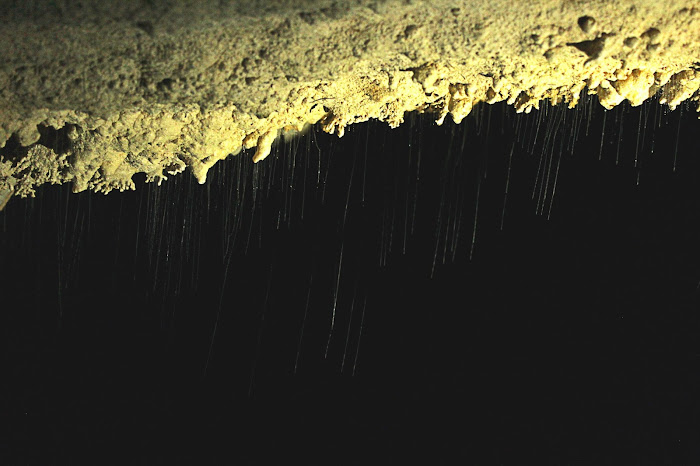 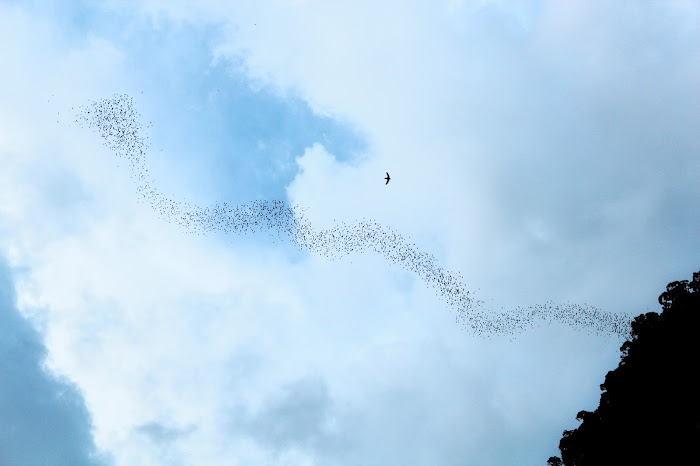 Glow worm threads // A floating ribbon of bats and a bird of prey
To walk into a dark, damp cave can be a daunting experience, I recall the sound of dripping water and the faint rushing sounds of an underwater river echoing along the stone walls. Suddenly I was aware of a tiny galaxy of scattered stars above me and for the first time in my life I could clearly make out the insect lures of glow worm threads that dangled like silk from the cave ceiling.

This feeling of awe struck me again and again as I ventured throughout the cave and I couldn't believe my eyes when I witnessed the wondrous sight of three million naked bats streaming from the mouth of Deer Cave like moving ribbons drifting towards the sunset. The ribbons looked like giant serpents and sounded like swarms of buzzing wasps as birds of prey circled nearby to capture any unfortunate strays. 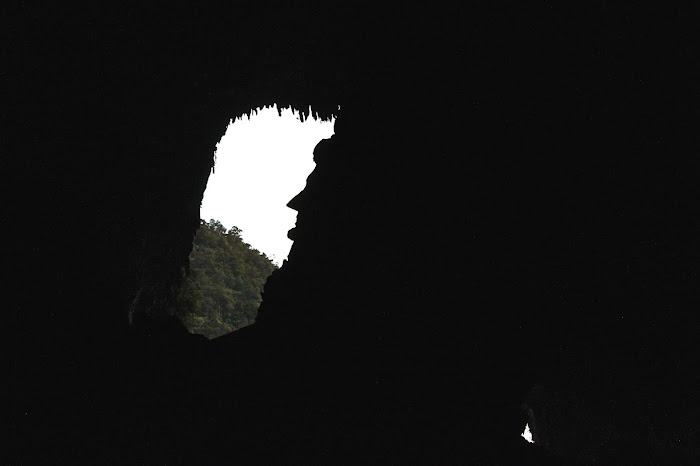 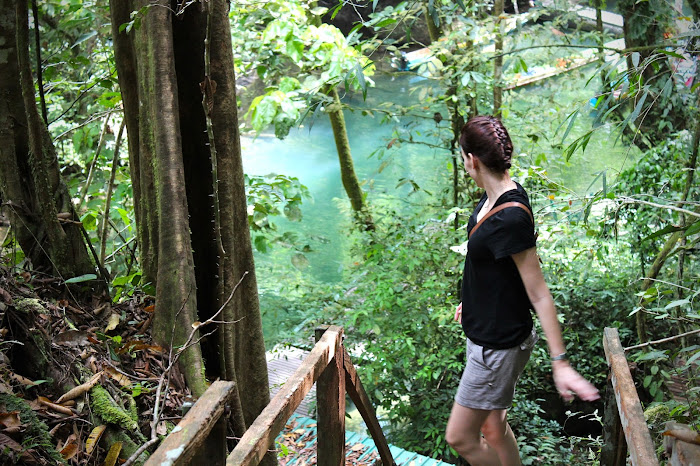 Abe Lincoln // crystal clear waters below
At the entrance of Deer Cave we saw the side profile of 'The Boss', aka U.S. President Abraham Lincoln. From the perfect angle, the silhouette of Abe's pointy nose and iconic chin can be made out against the mouth of the cave entrance.

I always write a travel journal on every trip to help me to remember what I have seen and the way I felt during the experience. The entries are usually brief, simple little sentences, thrown together over a meal or before bed and to be honest I almost always miss the last couple of days from any trip because I would rather be present in the moment than sit somewhere and write. Here I share with you some of my entries from my small, blue notebook that I carried with me throughout my jungle adventures in Mulu... 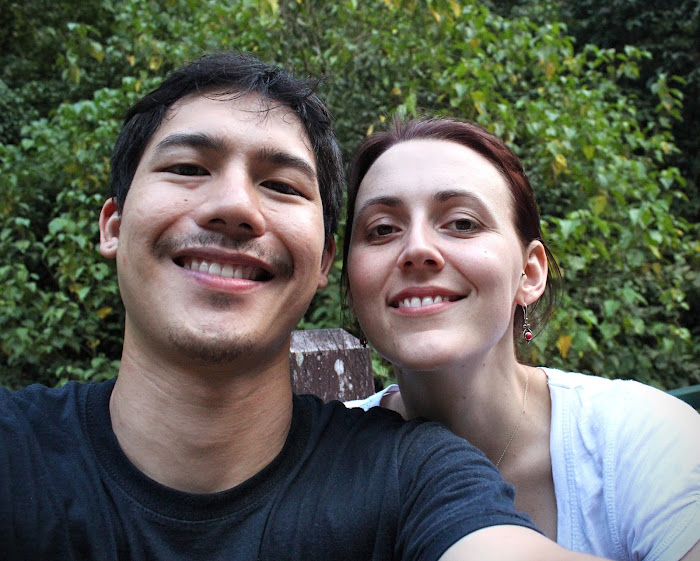 Exhausted and happy after a day of hiking exotic cave systems in Borneo
'The smallest of the four caves we visited was Langs Cave. It was very easy walking along the three kilometre boardwalk to the cave entrance. Han (our guide) and Byron discussed the corrupt money-hungry government and how they plan to build another dam, which would force the relocation of many of the local tribes. This senseless destruction of the environment and local people saddened me to my very core. It was hard to believe that part of the beautiful forest I was visiting might one day be gone.'

'The rainforest canopy provided much cooler walking conditions as the temperature dropped by some five degrees Celsius. I welcomed the cooler air, although it still felt quite hot and humid. My skin was sticky, loose strands of my hair stuck to my face and my shirt clung to my skin as if I had showered fully-clothed. Although it sounds unpleasant, I was actually captivated by my surrounds and the sweet scent of the rainforest.'

'Langs Cave was a spectacular show cave with cream walls and flat ceilings that were formed by standing ground water which dissolved the limestone. In contrast, Deer Cave was the largest cave I had ever visited, and indeed it is the largest cave passage in the world with massive chambers and between two to three million bat inhabitants. OH MY GOD did it stink from all the guano, which is a fancy name for bat feces. Can you even fathom the quantity of shit that three million bats produce?! The smell is incomprehensibly putrid and I'm ashamed to say, worth the discomfort to experience the wonder that is Deer Cave.'