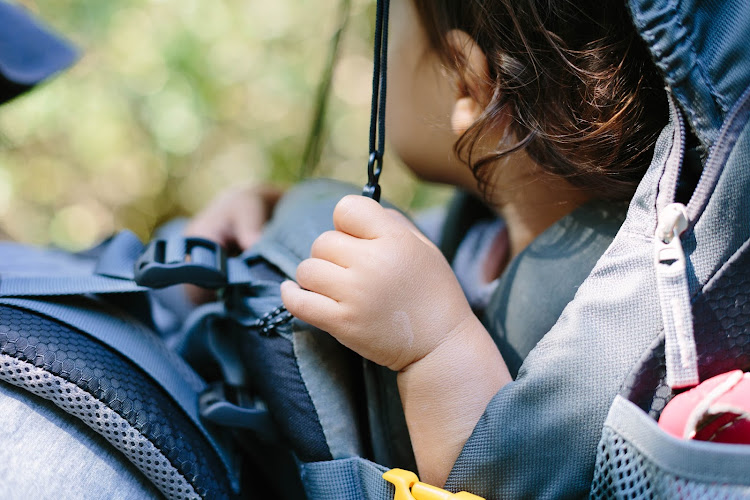 107/365
Her new sweet ride- It's a secondhand hiking pack for toddlers, a necessary purchase as she has outgrown the Ergo baby. For now she seems keen to sit and watch the world as we rock her up sand dunes and through the Australian bush.


+++
Yesterday went something like this... Up before 6am, washed two loads of washing, poached pears for her and made fluffy pancakes with a delicious pear, cinnamon and currant syrup for the both of us as her papa left for work before 7am.

She painted (her tummy and legs mostly), then we walked Coco on the beach (translation: Coco watched on as Love ran into the sea and rock pools fully-clothed). We saw a friend and his two older daughters at the beach, who weren't that keen on Love demolishing their sand sculptures.

Next, Love sat on the kitchen bench transferring almond meal into raw eggs as I tried to demonstrate 'like this, sweetheart' and encourage her to 'watch mama, Love'. Eventually the cake made it into the oven and I used two towels to wipe batter from Love's sticky fingers before I made pasta for lunch and Love enjoyed her next bath, which was necessary to remove the cake batter dreads and pasta sauce finger paint.

I put the third load of washing on as salty, wet, sand-covered ghost dog returned home, then washed the dog, greeted husband and enjoyed (two!) slices of moist orange and almond cake with half a cup of tea.

Next I continued packing in preparation for the big move. Love started to do that extra-cheeky thing she does just before she passes out so I whipped her into the backpack with the 'buh-bows' (bubbles) she requested (demanded) and hiked over the headland. She whined a little and proceeded to flick bubble mixture all over the back of my head and arms. Not to worry, I completely fudged the bubble recipe (3 parts water : 2 parts detergent : 1 part corn syrup?? I think Sesame Street lied...) then the kicking and whining stopped (she fell asleep).

Mama reheated her tea for the umpteenth time and went to bed with half-filled boxes littering the kitchen and wet washing still in the machine.

Living a blessed life by the sea. Trying to make do with the mere 24 hours in every day... #amiright?