Before I finish any jar of honey, I inevitably find myself holding a sticky knife. Sticky knives become sticky because sticky fingers are holding them. Sticky fingers are most likely the result of some uber-stealthy sneaky honey that manages to silently smear over the lip of the honey jar and onto my unsuspecting wrist. I think you know what I'm talking about.

I don't really like having sticky fingers because whatever I touch, ends up frustrating me, 'How did I get honey in my hair?!'

This morning I was exhausted from working in the bar into the wee hours of, well, this morning. I had set my alarm for 8:00AM so that I had enough time to lie in bed, press snooze a couple of times before dragging my droopy, uncoordinated self out of bed to the shower. The idea was to plomp myself down at my desk, coffee in my left hand, pen in my right hand, madly scribbling my last-minute French notes before class.

BEEP! BEEP! BEE...(Slammed the alarm...) Snooze again...This inane activity may have repeated itself maybe another half a dozen times.

Fine, I'm up. I want to break my alarm. There is no way in hell I am going to revise any French notes. Shower. Must drink coffee. Must make longer sentences.

The shower was mildly refreshing but I required sustenance. Rattling around semi-naked, except for my damp towel in the dark of my room so as not to wake the sleepy boyfriend (Yeah right, like I hadn't already woken him!) I realised I still had a little time to rustle up some breakfast. Naturally I thought of the quick cereal and milk option but upon venturing into the kitchen (yep, still semi-naked, dripping hair stuck to my back and bare shoulders), I had an idea.

I love using up things you find lying around! Sometimes last minute thrown-together meals taste better than the strategically planned ones and this breakfast is no exception. 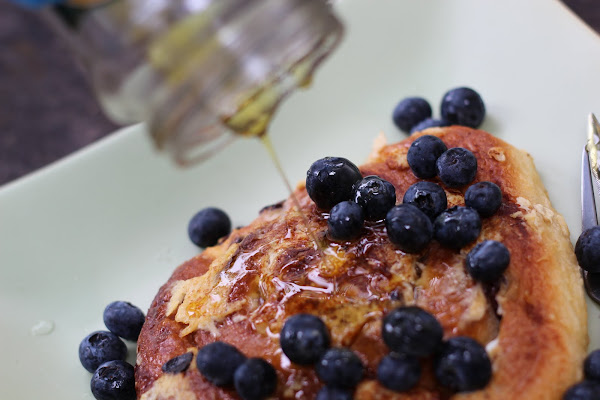 Take one leftover pain aux raisins (baked the day before, not older)
In Australia we sometimes call these snails with raisins.
In a bowl, gently whisk one large free-range egg with a fork, pour in a little milk (Only a very small volume of milk because you want this to be eggy. Also, I happened to use soy milk)

Heat a frying pan, then melt some butter until it foams.

Dip the pain aux raisins into the eggy milky mixture and turn carefully to coat and gently soak a little of the mixture in. Don't let it sit in there otherwise it will become soggy and we don't like trying to turn soggy bread in a frying pan because it doesn't like it and does that falling-apart thing.

Cook the 'French toast' in the hot butter, flipping once if you can help to avoid the scroll unravelling, serve on a large plate with fresh blueberries and a drizzle of honey. I used the last of my delicious Beechworth Tasmanian Leatherwood.

I love leatherwood honey, it has such a distinct flavour. It's difficult to describe as it has a distinctive spicy flavour and unique almost eucalyptus-like scent. I've often heard the expression, 'You either swear by it or swear about it'.

I happen to think it's the bee's knees. 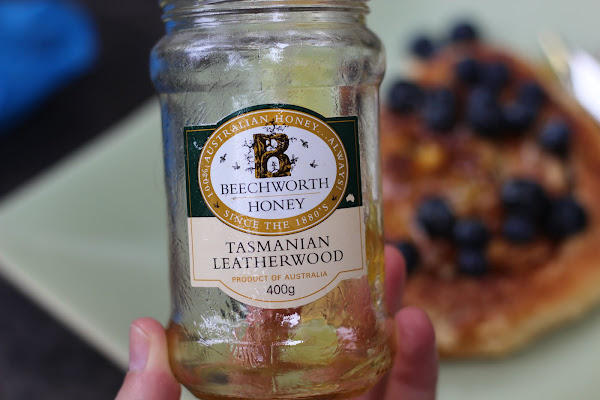 What a tasty brekky to begin the day. A little more authentic in the 'French Toast' department too!

Now I just have to wash my hands. Deliciously sticky! 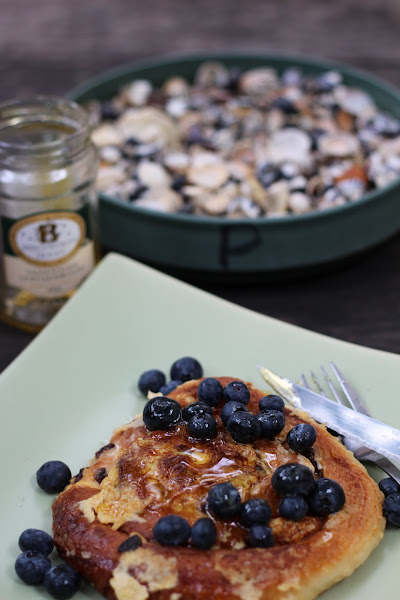