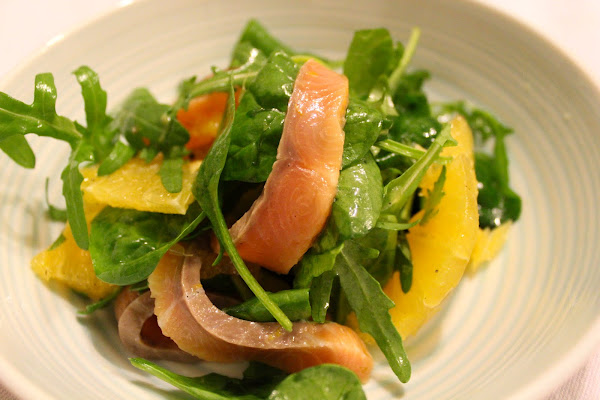 I remember how excited he sounded after the salmon fillet was weighed, 'Look Bel, it's five dollars. Only five dollars! Should we ask for more?'

'If you want to.' I answered. I had been watching him pace between counters searching for the best fish and I was interested to hear what he planned to cook, 'What are you going to make with it?'

He eyed my basket brimming with paper parcels carefully before turning to pay for the fresh salmon, 'We do have a lot of fresh seafood already, maybe I'll just get this fillet for now. We can have sashimi for lunch but for this fillet... I think I'm going to cure it.'

My thoughts immediately envisaged cool salmon carpaccio, but Byron had another idea in mind and it made for a delicious surprise.

1 VERY fresh salmon fillet (from the seafood market, not your local deli)
2-3 Tbs rock salt (This is a guide only and will depend on the size of your salmon fillet)
1-2 Tbs raw sugar

Coat the fillet in the rock salt and raw sugar and gently massage into both sides of the salmon fillet. 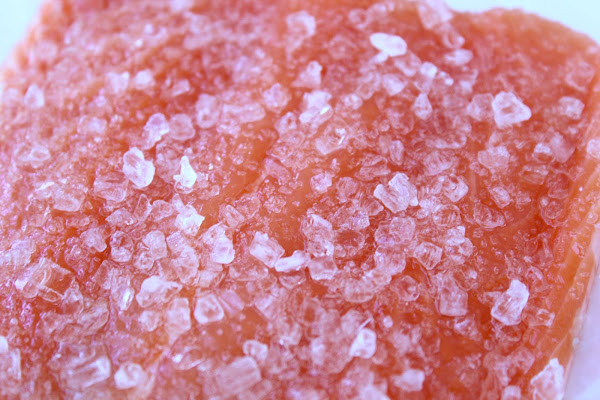 Cover the fillet and refrigerate overnight. The next day, you will notice a lot of the moisture from the salmon is in the bottom of your container. Remove the salmon from the salty liquid and carefully pat the fillet dry with paper towel. In a fresh bowl, add the zest and segments from the lime and lemon, coat the fillet well, cover and return to the refrigerator for several hours, or overnight. The longer you leave the fish, the more firm the meat will become so the length of time you leave the salmon is dependent on your personal taste. Byron left the fillet in the citrus mixture overnight and on the following night, he removed the fillet and sliced it into thin strips for the salad.

In a bowl, add the fresh, crisp rocket and baby spinach leaves, one sliced navel orange, and as many of the cured salmon strips as your prefer. Slowly drizzle with olive oil (Byron used his orange and vanilla olive oil here) and season with black pepper. 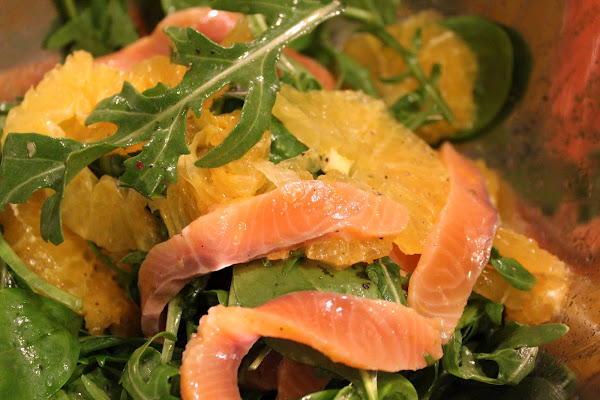 Turn the salad over a couple of time with your fingers, then place a handful of the salad into the centre of a bowl and serve immediately with a refreshing drink, such as soda with ice and fresh lime or a crisp white wine.

The simplicity of this dish is starkly contrasted with the complex flavours and vivid colours of the bright green leaves, the glistening orange and the pink salmon slices. The salmon and citrus flavours are enhanced by the salty salmon flesh, however the sweet orange slices and faint hint of vanilla in the olive oil balance the saltiness superbly.

This salad can be served as a light meal or an entree. We enjoyed ours as a meal late one night, after a very, very long day and one of the best things about it was that the majority of the preparation had taken place over the preceding two days so it was thrown together in no time.

I love discovering new ways to prepare fish and though I originally pictured something very different when Byron first told me he was going to cure the fillet, I dare say you could also use his same method of preparing the cured salmon, then serve impossibly thin slices of salmon carpaccio arranged in a fan on a plate, adorned with sprinkled green peppercorns, capers and crumbled goats cheese. This would be a 'pretty' starter to serve before a main meal and would impress your guests if you were thinking of having a seafood-themed dinner. 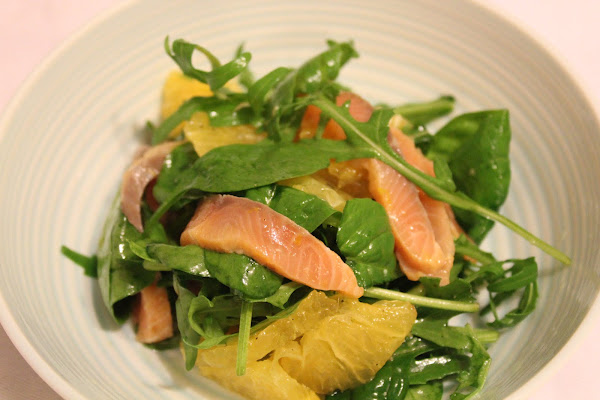 In my case, Byron's cured salmon and orange salad made for the perfect meal to end a weary day after work. Sometimes the best thing to do after such a day is to sit down with your best friend, a glass of wine, and a wonderful meal to savour with a slow guitar melody softly playing in the background.

Now if you think this sounds like a simple dish to prepare (and of course you would be right), come back soon to see what I prepared for a lazy dessert with our leftover white wine.